New sketches (psychic drawings) by James Murray have been added, and new channeled messages from Michael and Bob Murray are also published at our web site. Details below.

The sketches are of Michael's first days in the afterlife. Excerpts of his messages from the book The Stars Still Shine: An Afterlife Journey are included below each picture.  View all four sketches  at our web site. You'll need to move down the page to see the the latest ones:

New Messages from Michael and Bob Murray
The messages are available at our web site at:
https://www.thestarsstillshine.com/bobmar21.html

Posted by TheStarsStillShine.com at 1:10 PM No comments:

[The Stars Still Shine] We're back

You have been waiting patiently for our news from the afterlife.

• We will be publishing new illustrations (psychic drawings) by James Murray and channeled messages in March 2021.

• We have contributed to a new book "Heaven-Sent Love Letters: Between Tom in Heaven and Nancy on Earth" by Nancy S. Calumet.
Book information follows comments from Bob Murray:

"Hello one and all,

This is Bob speaking from the great beyond AKA Heaven. I was asked by James to say a few words about a new book called "Heaven-Sent Love Letters: Between Tom in Heaven and Nancy on Earth" by Nancy S. Calumet. Since I have read it, I have bestowed my thoughts. James made a contribution to the book. Its about an afterlife described by Tom Calumet (1927—1990) who is exchanging letters with this wife Nancy on Earth. In the last few years, James has been channeling Tom's words and letters. Tom's day-to-day accounts involve some of the same places where Michael and I have frequented in the afterlife. We have become friends with the couple and are mentioned in their exchanges. I also have a few messages in the book. Keep in mind that Tom recounts his afterlife experiences differently from how I or Michael tell ours. Sit back and enjoy the read!

Visit the Amazon.com page to read reviews and click or touch the book cover image to browse the first pages of the book:

Posted by TheStarsStillShine.com at 11:48 AM No comments:

On December 16, 2017, James Murray was a guest on Peaceful Planet hosted by Marcia McMahon.
Listen to this interview by visiting:
https://bbsradio.com/podcast/peaceful-planet-december-16-2017

Listen to James' previous interviews on the show:
https://bbsradio.com/peacefulplanet


Posted by TheStarsStillShine.com at 12:02 PM No comments:

On August 27, 2016, James Murray was a guest on Peaceful Planet hosted by Marcia McMahon.
Listen to the interview by visiting:

Posted by TheStarsStillShine.com at 8:57 AM No comments: 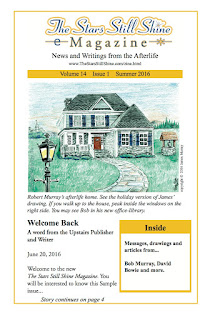 The sample issue of The Stars Still Shine Magazine is now ready! Your input is most welcome.  Before you open the magazine, here's a little note from the Upstairs Publisher (in Heaven), Bob Murray:

"Greetings to all our devoted readers,
I'm very excited to say, and I'm not often very excited, that we have the magazine
ready for you. It's great to be back in the saddle.
Kindest Regards,
Bob"

To receive (download) your copy of the 2016 sample, open your web or mobile browser and
click this web address or copy it into your browser:

View the issue at yumpu.com, a digital publishing service. Let us your experience with reading the issues at:
https://www.yumpu.com/en/document/view/55768579/2016-sample-issue-of-the-stars-still-shine-magazine

If you have difficultly downloading or viewing the magazine, please contact us.

Other Viewing Formats
Convert your downloaded PDF(s) into other formats (EPUB and others) to view on more devices.
In a Web or mobile search, type "convert to EPUB " or "convert to (your format) ".

Kind Regards,
James
Posted by TheStarsStillShine.com at 4:54 PM No comments:

For the first six months of  2016, we will be presenting new items that we are considering for publication in The Stars Still Shine Magazine. Your input is and will be most welcome and appreciated.  A letter from our Upstairs Publisher/Writer about the magazine follows.

Hello one and all! I still exist and am writing this introduction through my son, James. I understand you are a devoted reader of our magazine 'The Stars Still Shine E-magazine'.  Thank you for all your years of readership and devoting your time to our writers and storytellers. They thank you and I thank you from the bottom of our hearts!

Now, I'm writing to tell you that I wish to continue the publication. From where I sit now, I have an office in a new big house on the Other side. I arrived a few months ago and have found my way around though I am not unfamiliar with my surroundings.

When 'living', I wrote many stories, some book length that have not been published. These stories are fiction but do contain influences and inspirations from my 'life' time on Earth and from other 'people' on the Other side. I brought through stories from writers on the Other side when I was alive and kicking. Well, maybe not kicking but you get the idea…  These writers helped me immensely; I learned about writing in the process. I give them credit.  When bringing through their stories, I like to think I added some flavor. They tell me I did.

I'm presently writing stories but James needs more time to sit down and 'put pen to paper'. He says he will have some of his messages (my news) and his drawings to add to each issue. I can't say how many issues will encompass my writing (my Earth writing) but let's say we will keep you entertained from a few years. But that will not be the end as James will have time to compile more from me and maybe others.

So I just want to add before I end this introduction that I'm very much interested in your input on what we are proposing for the magazine. We look forward to hearing from you.

Much love from your Upstairs Publisher and Writer,
Bob

PS - Carolyn, our Upstairs editor says she is all for the transition of the magazine as long as it sits well with our readers.

Bob sits in a recliner arm-chair in his Other side Library-Office waiting for James to write down his words.

Note: If you are not able to view the drawing, please visit
http://www.thestarsstillshine.com/bobdec15.html

James: "Can you tell me some details about the drawing I did?"

Bob: "James tells me he made the drawing to show our family and friends where I am living now.  I do like the drawing I might add.  He spent many hours on the picture while I gave him some insights into what and where to place things.  Now, if you look carefully you will notice a castle in the top left corner. That is a special castle created by a neighbor of mine, Diana, Princess Diana. Also on her large estate is a large manor that houses her staff and children she cares for who have passed on recently. She says her home is their home. The castle is a large playhouse for the children.

Now back to my home here.  I didn't create a large house just for myself but made enough space for family and friends to visit.  The house is larger inside than appears.  You can do that here :)  In fact, you can squeeze a mansion into a tiny cottage if you imagine it. There is no limit except with your mind.  I had the exterior of the house decorated for the holidays by James and he also helped granddaughter Emily decorate a tree inside.  James also gave me the snow.  I did not want the snow on the walkway or roof.
Posted by TheStarsStillShine.com at 9:20 PM No comments: